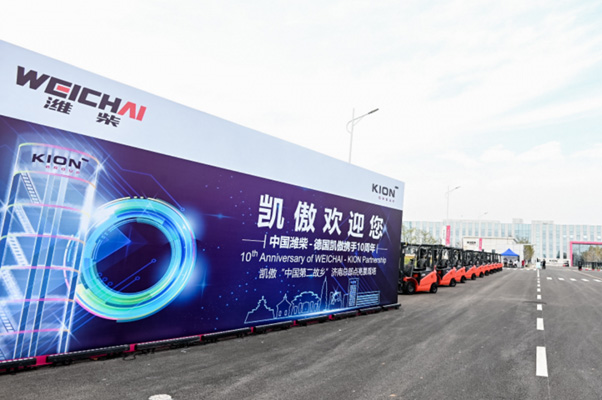 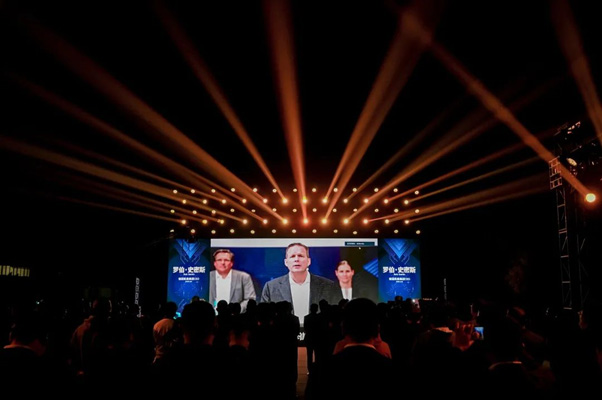 At the event, a wonderful video vividly showed the glorious mark of KION and Weichai cooperation for 10 years. Rob Smith, CEO of KION Group, deeply summarized that “KION is growing up in China”. From the listed in Germany, to the integration of Dematic, to the KION Jinan Intelligent Experience Center, KION Group established global value product technology research and development center in China to provide more and more flexible products and material handling solutions for the Chinese market, also provide a powerful engine for KION’s sustainable development on a global scale. 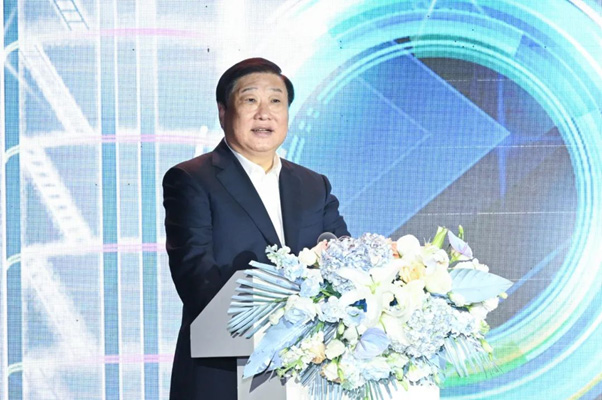 As an important strategic partner of KION Group, Tan Xuguang, Chairman of Shandong Heavy Industry Group and Weichai Power, said that “the strategic hand in hand between KION and Weichai has created a model of cooperation between Chinese and German enterprises. In the past ten years, the two sides, adhering to the concept of openness and win-win, have given full play to each other’s professional and resource advantages, and made great progress in mutual integration and promotion.”

Yu Haitian, Deputy Secretary of the Jinan Municipal Party Committee and Mayor of Jinan, said in his speech: “The sincere cooperation between Weichai and KION has not only won extraordinary development performance for both parties, but also established a firm friendship between us, sharing weal and woe, and working side by side, making Jinan a true ‘second hometown’ of KION.” 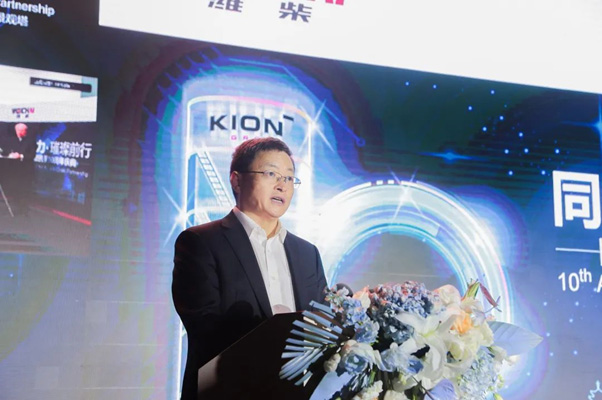 In Shandong, the focus of the domestic market of KION and Weichai, the KION Jinan intelligent plant that has been put into operation and the KION Jinan Dematic modern plant and technology center that will be launched soon will fully meet the needs of Chinese customers and empower the development of the industry with smart logistics. Chingpong Quek, Member of KION Executive Board and President & CEO KION ITS Asia Pacific & Americas, mentioned in his speech: “As the green wisdom industry city of Shandong Heavy Industry (Jinan Laiwu), an important part of the whole industry chain, KION Jinan develops ‚technology engine‘ with 100 years of German research and development experience. Together with Weichai, we help Jinan replance its old drivers with new ones, jointly promote the domestic and international double circulation to enable the upgrading of China’s logistics.” During the celebration, KION Group and Weichai Power jointly lit KION China Forklift Landscape Tower, which represents the strength of cooperation between the two parties. This 24-meter-high, 6-floor tower stands in the KION Jinan plant. It fully testifies to the strong strength and determination of both KION Group and Weichai Power to explore the Chinese market, and jointly pushes the construction of modern intelligent logistics in China from blueprint to reality. On September 28th, the launch ceremony for Linde to produce the first batch of over 100 2.5-ton lithium electric counterbalance forklifts for North American customers was successfully held in Xiamen. Mr. Chingpong Quek, Member of the Executive Board and President & CEO KION ITS Asia Pacific & Americas, Mr. Lean Chong Chieng, Vice President of Strategic Market and Product Management of KION APAC, and other leaders and guests were present to witness this exciting moment. This new forklifts delivery is not only an important milestone for KION Group and its North American customers in implementing sustainable development strategies and promoting the transition from oil to electricity, but also demonstrates the strong strength of KION Group’s Linde brand in overseas markets. 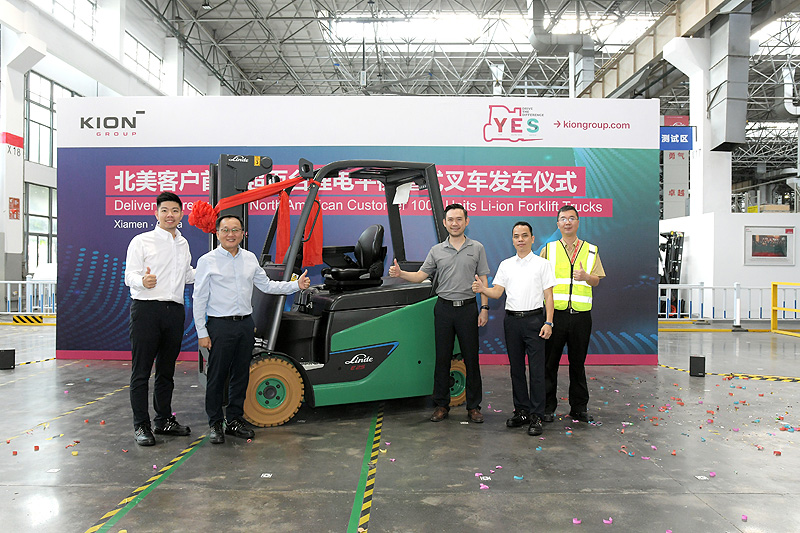 CP said at the conference: “I am particularly happy that KION Group has reached a long-term cooperation with a well-known company in the construction industry in North America. As our important partner, we are confident to work with our customers to provide more advanced, more efficient and more green products and logistics handling solutions. We believe this delivery is a new starting point for our cooperation, and we will also create a continuous flow of logistics benefits for users around the world in the future.” 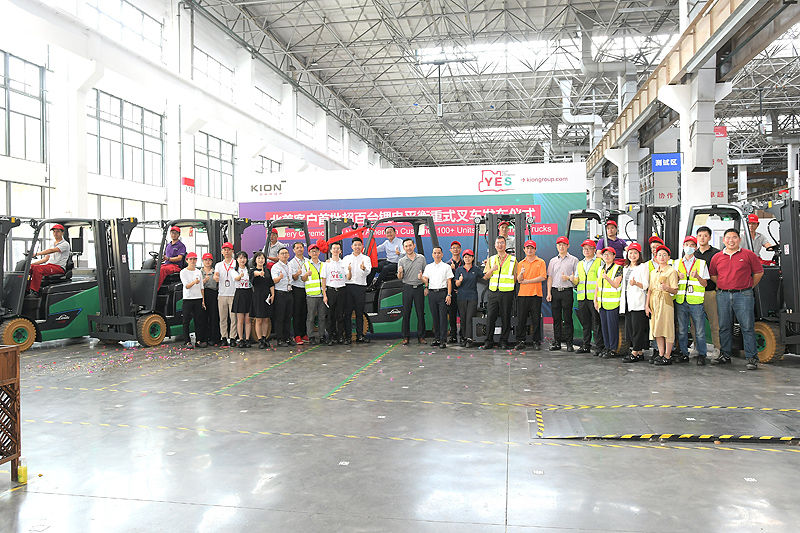 On June 19, 2022, the 3rd Qingdao Summit of Multinational Company Leaders was grandly held at the Qingdao International Conference Center. This eye-catching event will once again turn the world’s attention to China and focus on Shandong. KION Group, as a representative foreign-funded manufacturing enterprise, was invited to participate, focusing on the global supply chain pattern together with the majority of multinational companies and leading enterprises.

Jinan Customer Experience Centre, the Customer Option Workshop and the truck tower were unveiled on Jun 22nd in Jinan Plant. CP and the KION China management team attended the ceremonies that were well-arranged through the whole day. This marked the completion of the first construction phase of Jinan Plant. The Customer Experience Centre has three main exhibition areas, including automation, digitalization and new energy three themes. On the same day, the Linde new energy counter-balanced truck were launched in Jinan.

One of the most coveted awards in the material handling equipment industry in Germany has once again gone to Linde Material Handling (MH). For the sixth time in succession, readers voted the materials handling specialist “Best Brand” in the “Industrial Trucks” category. The award has been presented annually since 2017 by Stuttgart, Germany-based publishing house ETM in collaboration with the DEKRA testing organization.

The ETM Awards focus on companies that develop innovative products and services for the transport and logistics sector. This year, around 6,000 readers responded to the call from the magazines trans aktuell, lastauto omnibus and FERNFAHRER, as well as the online portal eurotransport.de, and cast their votes. The Linde brand achieved the highest approval ratings in the “Industrial Trucks” category. Stefan Prokosch, Senior Vice President Brand Management at Linde Material Handling, accepted the award on June 1 at the “DEKRA Future Congress Commercial Vehicles” conference in Berlin. 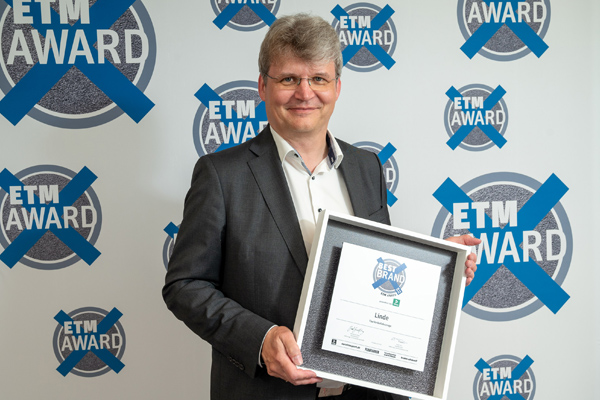 “The award is a special recognition of the many employees of Linde Material Handling and our local network partners in particular. Day after day,  we all put our heart and soul into satisfying our customers and being a first-class partner to them,” Stefan Prokosch emphasized upon receiving the winner’s certificate. “Thank you for your vote – we regard it as an incentive for continued commitment.”

According to the publisher, the ETM Award is regarded as the benchmark in the commercial vehicle industry. Whether vehicles, retarders, refrigeration units or truck servicing: The readers’ choice has been carried out according to a uniform methodology since 1997. This year, 219 vehicle models from 16 categories competed for the “Best Truck”, “Best Van” and “Best Bus” awards. In parallel to the ETM Awards, the “Best Brand” award was presented in 29 categories.

Linde Material Handling GmbH
Linde Material Handling GmbH, a KION Group company, is a globally operating manufacturer of forklift trucks and warehouse trucks, and a solutions and service provider for intralogistics. With a sales and service network that spans more than 100 countries, the company is represented in all major regions around the world. On September 8, the 2020 Xiamen International Investment and Trade Fair was grandly opened in Xiamen. Linde (China) and China Telecom Xiamen Branch made a wonderful appearance. Empowering the future with 5G, Linde robotics C-Matic was displayed, presenting a smart, relaxing, and futuristic new experience to global customers, which was unanimously recognized by visitors. According to the requirements of Linde (China) Robotics Division, Linde (China) completed the 1183 AGV China Robot Certification (CR) work successfully with the cooperation of R&D, Quality and Production departments, and the 1st CR certificate was received on Aug.24th, 2020.